OK.....I know it came out several years ago, but I saw Scarface for the first time, just now. Now, I don't want to ruin the film for anyone so if you haven't seen it yet, please read no further, but it ends badly. It is not an "up" movie. You do not leave the Cinema (or in my case the Couch) feeling good about yourself. I always get so involved with good movies - as any of my friends (or, as is often the case, "ex-friends") knows, I am not to be disturbed whilst watching a movie. Do not, under any circumstances say something like, "Hey this actor? What else has he been in?"....I am involved in the story, fucknut. I mean it. Even if the damned building is burning down, those flames better be pretty fucking close before you try telling me about it. And do not, repeat: DO NOT ever say "Watch this part"......Well what the hell did you think I was watching, Cecil B. De Fucknose?..........But I digress.

So anyway, I was really upset about the ending of Scarface. I'm pre-menstrual and I have a show tonight and I am simply not in the mood for all this tragedy. So I've comforted myself by devising what I think is a satisfying sequel to Scarface. I hope it will be a comfort to you, too. 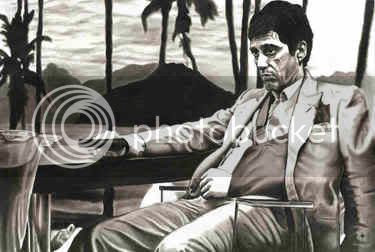 WE SEE SOMETHING SILVER AND SHINING. AS THE CAMERA PULLS AWAY WE SEE IT IS THE GLITTERING GLOBE IN TONY MONTANA'S MANSION WITH THE WORDS, THE WORLD IS YOURS EMBLAZONED ON IT. TONY MONTANA'S BODY IS LYING FACE DOWN IN THE POOL BELOW. WE SEE THE LAST OF SOSA'S MEN (THE ONES THAT ARE ALIVE, THAT IS) LEAVING THE BUILDING. SILENCE. SLOWLY, ALMOST IMPERCEPTABLY, A TINY BUBBLE APPEARS ON THE SURFACE OF THE POOL. WE "DIVE" INTO THE WATER TO LOOK UP AT TONY MONTANA'S FACE. HIS EYES ARE DARTING ABOUT WILDLY AS HIS CHEEKS STRUGGLE TO HOLD THE AIR THAT IS KEEPING HIM ALIVE.

HEARING NOTHING, TONY RAISES HIS HEAD ABOVE THE WATER AND TAKES A GRATIFYING GULP OF BREATH.

TONY: You there, Sosa? You there you fuck?

THERE IS NO RESPONSE.

SUDDENLY, THERE IS A SOFT RUSTLING NOISE FROM THE TOP OF THE STAIRS.

TONY: Gina? Gina? Is that you! (HE RUNS TO HER) I thought you were dead!

GINA: No, Tony, they can't kill me with their bullets.

TONY SEES THAT GINA IS HOLDING A GUN. AND SHE IS AIMING IT AT HIM.

TONY: What are you doing with that gun, Gina?

GINA: What? I'm not pretty enough for you?

GINA: You kill my Manny and now I will kill you!

TONY: You think you can kill me with your bullets, man?

THERE IS A SOUND AT THE BALCONY.

MANNY: Yeah, that's right, you fuck, you can't kill me with your fucking bullets you fuck.

TONY: That's right. And you know who else can't kill me with their fucking bullets, man? You Gina. That's right, you fuck.

MANNY: Hey, don't you call her a fuck, you fuck.

GINA: Hey don't you call my fucking brother a fuck, you fuck.

MANNY: Fuck you, you fuck.

TONY: Don't you call my sister a fuck you fucking fuck.

MANNY: Who you saying fuck to you fuck.

TONY: Fuck you, fuck me, fuck everybody!

THEY ALL DISSOLVE INTO LAUGHTER AND HUGS.

TONY: Hey, I been thinking man, this crime business is for cocksuckers.

MANNY: Yeah, that's right man. So what, like you gotta plan?

TONY: That's right. Things are gonna be different from now on.

ARIAL VIEW OF LAS VEGAS. WE SEE ALL THE GLITTERING LIGHTS AND GARISH BUILDINGS. BUT THERE IS A SHADOW CAST OVER EVEN THE TALLEST OF THESE GAMING MONOLITHS. SLOWLY WE LOOK UP TO SEE THE SOURCE OF THIS "SHADOW".......A BUILDING, BIGGER THAN ALL OF LAS VEGAS PUT TOGETHER. WITH PINK AND PURPLE LIGHTS OUT GLITTERING THE LAS VEGAS STRIP:

The Battlefield at Ypres 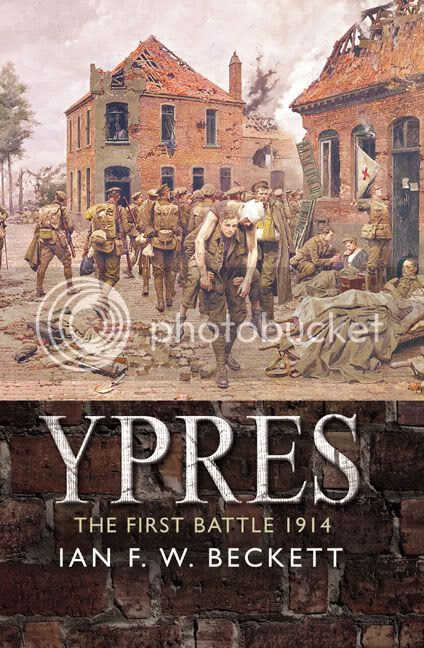 One of the great things about living in Europe, at least for me, is being able to visit historically significant places, usualy by travelling less than a few hours. So when Wim said that he was interviewing some WWI buffs at Ypres (or "Ieper" in Dutch), and asked if I wanted to go, I was thrilled. It turned out the people he was interviewing are called "the Diggers" - (not to be confused with the Australian regiment of the same name).

The Diggers are a group of amateur archaeologists who go to WWI battlefields every weekend to recover unexploded bombs. There were about 15 of them there, most of them Belgian guys in their 50's and 60's. They were all Belgian, but I was very happy to discover that one of them, Frans, was a Dutchman who had lived in Yorkshire for many years and was fluent in English (albeit with the craziest Dutch/Belgian/Yorkshire accent!).......This was a good thing, too, because otherwise my limited grasp of Dutch would have left me to having a conversation inquiring about the weather and how much bread rolls cost.

I asked Frans if he thought they'd find anything. After he was through laughing, he explained to me that there were literally millions of unexploded bombs in the earth beneath this field we were standing in.

There was one guy with a metal detector and he walked lazily out to a random spot, switched the detector on, then nodded "yes". And in about 10 minutes, they had perfectly unearthed a bomb in a nice symetrical hole. Amazing!...The bored guy with the metal detector was walking different places and various guys were digging in various places. After only 45 minutes, they had dug up 7 bombs, each in a nice symetrical hole, awaiting collection by the Army later in the day. 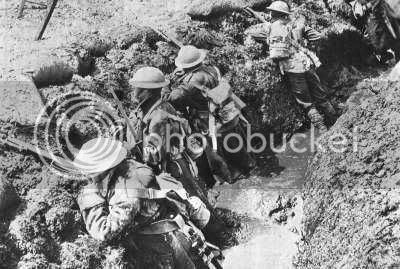 I was walking about alone as I like to do in those sorts of places, feeling the vibes. My friends who know me well have been with me when I've felt or communicated with ghosts in various places, and I honestly thought this place might be similar, but all I felt was an overwhelming sadness. Really the sadness permeated everything. It made it hard to walk. The air was heavy.

When we think of Bad Wars, I think a lot of us tend to think of WWII, for obvious reasons like The Holocaust. But WWI was actualy a lot worse in terms of actual battleground warfare. This war was fought in trenches, in conditions that are hard to imagine. 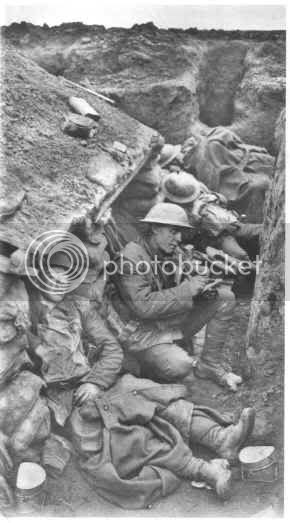 Men, most of them young, (as is always the way), would be stuck in these trenches for months or years - sleeping in the cold, the wet, the mud, and all the while with bombs exploding constantly around them. WWI on the battlefields of Ypres was the first time that gas bombs were used, so in addition to the constant shelling, soldiers would also be under threat of dying a burning choking death because of mustard gas. But worst of all, I think, would have been the constant bombing, bombing, bombing. Their nerves must have been shredded beyond belief. The battlefield was so deadly that if one of your men was on the field, dying in pain, he would more often than not have ot be left there because to rescue him would mean absolutely getting killed. 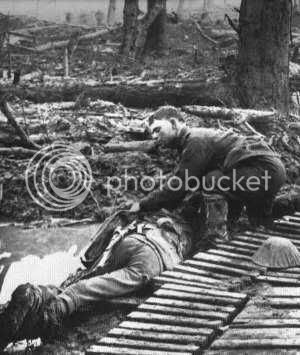 And yet, through all this, this absolutely magical thing happened on Christmas day, 1914: The firing ceased, both sides were singing Christmas carols, and eventualy both sides; the Allies and the Germans, came out for a Christmas Truce and played football ("Soccer") together. They even exchanged gifts. But the next day, it was business as usual, as they went back to shooting each other again. I can't think about that without crying. Aaaah, nuts, it got me again as I typed it. 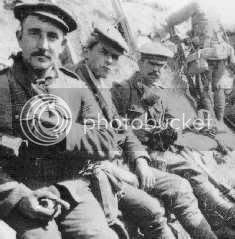 I was thinking about all this stuff, walking around that field. I was looking down at one of the bombs and I lazily started touching it and tapping on it. Then I heard a voice behind me; "You probably don't want to be doing that."

....Turns out it was an undetonated mustard gas bomb - if I had accidentally broken the glass cylinder at the top, I could have killed everyone there.......See, this is why I love Europe. If this had been an unexploded bomb somewhere in the States, the whole incident would be on the news with graphics reading "terror alert"; I never would have been allowed to come within a mile of it, and certainly not close enough to possibly detonate it. We Americans tend to be so damned coddled and fearful. A nation of alarmists, we are, creating dramas wherever we can. The Europeans, however, have sort of seen-it-all-done-it-all attitude. They tend to take it all in their stride and it's downright fucking lovely.

I asked Frans if he worried that they might accidentally break one of those cylinders one day.

"I've been doing this a quarter of a century, and it hasn't happened yet" He said. Although he went on to tell me that often they were broken under the ground, and as the diggers were digging into the earth, their throats would suddenly start burning.

"Walk away" He said.

I Can't Even Fake My Own Accent Anymore...

I haven't been giving my accent much thought, but apparently living outside of the US for the past 6 years has given the old pronunciation quite a beating.

So the other day, I got called in to make a voiceover demo, here in Gent, because apparently they sometimes need British and American voices for various things. They had me read this copy. First I did it for them in sort of a middle-of-the-road Standard British. That was fine, but I needed to be more expressive, the guy said. (Since when are the Brits ever expressive??).....Then he had me read the same copy in an American accent. I got maybe 2 sentences in and he stopped me; "I'm sorry, can you possibly make it sound more natural please?"...And, GOD, I was trying, but to my astonishment the best I could do was something nearing how Jane Seymour sounds in Dr. Quinn, Medicine Woman. It sounded forced....Why???

"Never mind" The guy in the booth said, "It's just a hard accent to do if you're not a native speaker"

"But I am a native speaker!!" I screamed in my defense.