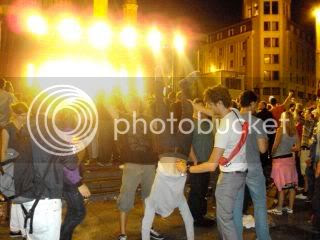 If you don't know what the Gentse Feesten is, it's a yearly 10 day festival in the city of Gent (a.k.a. "Ghent") where I live in Belgium. It just ended, so don't rush out here or anything, but a very nice time was had by all. I spent most of my time at our comedy room as I can't stand crowds (kind of a drawback at festival time, I know) but I took pictures of lots of stuff anyway. So here's some stuff: 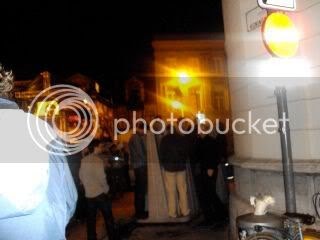 OK - here's the first thing. This is a pee stand. They have these all over the place during the Feesten, and even though there were more of them this year than any other year, apparently there was a 200% increase in the number of incidents of wild plassen (peeing in random places). Although the mind boggles as to how they arrive at these statistics. 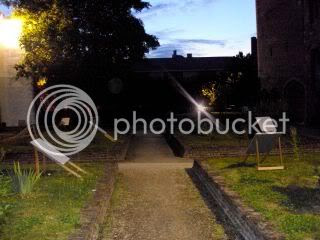 Here is what the area behind the comedy space looked like. Those white panels you see everywhere are really insipid poems mounted on sticks. 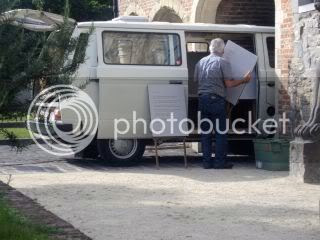 And here's the last day of the festival when they removed the poetry panels! Yaaay 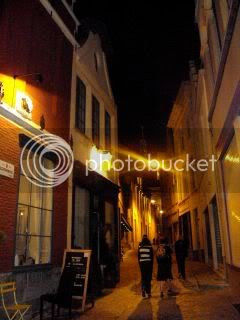 Here's one of the non-crowded streets I favored on my walk home. 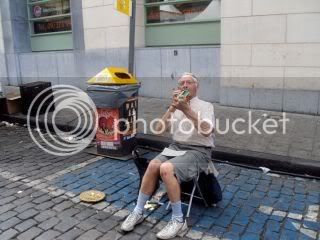 The best act at the Gentse Feesten. 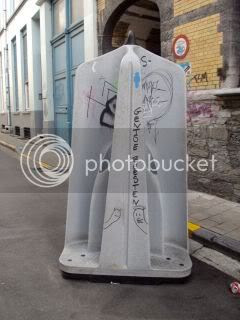 An empty pee-stand on the last day. Cute graffiti, eh? 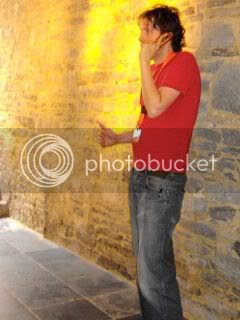 Wim as he appears all through the festival with a phone permanently embedded in his ear. 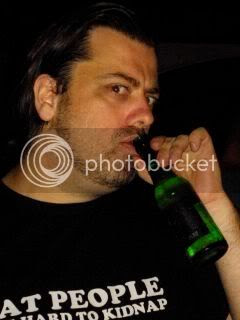 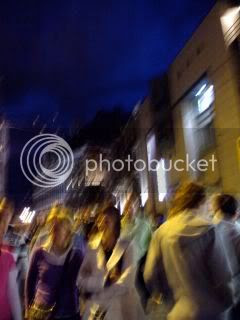 This is my I-don't-like-crowds shaky photographic handywork. 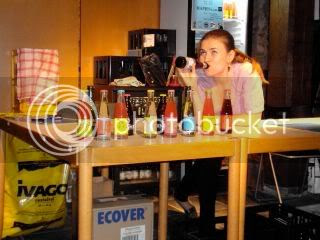 You turn your back on those Russian bartenders for one second..... 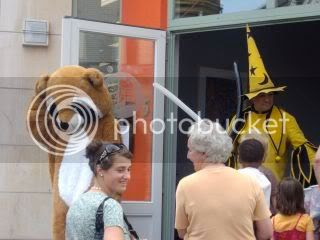 The worst act at the Gentse Feesten. There is nothing less appealing than bitter out of work actors making uninspired balloon animals whilst wearing wanky costumes 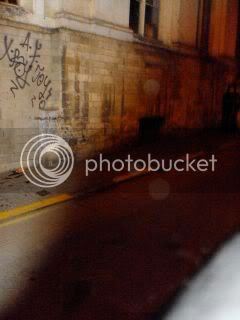 Ghosts! See those orbs?! Those are ghosts! ....I took this photo over my shoulder in an attempt to clandestinely photograph one of the pee stands being used; I misaimed and got ghosts!
.
.
.
.
.
Posted by Jovanka at Thursday, July 30, 2009 3 comments: 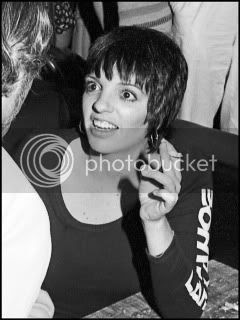 As I write this blog it's 5:00 AM. I can't sleep because I thought it would be a good idea to drink coffee at 7:00 PM. Well really I would have had tea but then it turned out we didn't have any soy milk left. I'm OK just drinking coffee black so I had that instead. And it was instant coffee and near the end of the jar so I just dumped the whole contents in which to be truthful was probably about 4 cups worth. But in my defense I was holding a kitten so I really only had one hand to work with because with the other hand I was desperately trying to keep the kitten from sucking on my neck. Too late, by the way, because I later discovered that I've got 5 tiny-sized hickeys on my neck already. She was weaned too early apparently and now I look like I've been making out with an elf.

When I can't sleep (as right now - see above paragraph) I look up inspirational stuff on the internet. And who do I love the best? Yes that's right: Liza with a "Z". Go play the video above. Go ahead. I'll wait here. Can ANYONE sing "New York, New York" like that? No one else should even be allowed to sing that song ever.

So I was watching all these videos and I just came across something I'd never seen before and it turns out it's the best thing ever! Liza Minnelli singing Barry Manilow on The Muppet Show!!:

I have been working out like a crazy person for the last three months - first by walking insane distances and the past few weeks by daily hour-long sessions on the elliptical trainers at my gym. And you want to know how much weight I've lost?

And before you say, "Well maybe you're eating more.": No, I'm not. As a matter of fact I've been eating less. Much less. AND I'm a vegan now so I can't blame the cheese as I would have done in days of yore. I've been eating all vegetables and fruits and healthy healthy food, and guess what? Not only have I not lost weight, I've actually GAINED 5 KILOS!!!! That's 11 pounds for any Americans reading along. That's more than any of my cats weigh. That's nearly two cats. I've gained two cats.

And NO, it's not "muscle weight". Unless I have the world's squooshiest muscles, and then what is the point?

So I read all this stuff online and I determined that I must have a problem with my thyroid - it's the only thing that makes sense. So I went to the doctor a few days ago and I just got the results back today: Not only do I not have a thyroid problem; but I'm incredibly, astonishingly healthy. I have the body of a 20-year-old apparently. An active, albeit chubby, 20-year-old. Fuck off!.....When I got the news I couldn't stop crying. And it didn't help that my evil skinny husband was laughing at me for crying about being healthy. But here's why I was crying: If it had been a thyroid thing, I could have taken pills for it that would have made me thin! But since it's nothing I have to face the fact that I might be CURSED TO BE FAT UNTIL THE END OF TIME.

Meanwhile the closetful of clothes I've bought in the size I should be are slowly going out of fashion.

Freaky Goings-On At My Gym 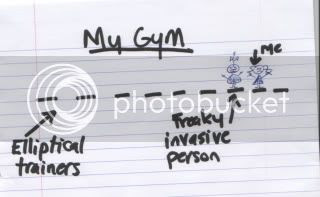 Here’s what’s been happening: Every time I’m at my gym (which is never very crowded by the way), I’ll be on an elliptical trainer, and someone will come and get on a trainer RIGHT NEXT TO ME. Now bear in mind that there are 9 elliptical trainers, but it doesn’t matter if all the rest are empty, still someone will get on the machine right next to mine. I thought maybe this was because I tend to be in the middle of all of them and perhaps people just wanted to look at the TV screens, but NO, it happens even when I’m on the very end of the row at either side. WHY???.......Then the other day just to check my theory, I got on a treadmill instead (5 in a row, I got on one at the end) and even though they were all empty, sure enough the next person who came in got on the one right next to me. WHAT THE HELL IS GOING ON??? Is this a Belgian thing? Do Belgians have some sort of a reverse space thing to the (International I thought) RULE that you’re supposed to get no closer to another person than one empty machine between you, and even that’s a little creepy when they’re all empty? And what’s terrible is that it’s all set up so that I can’t say a thing. If I politely say, “Do you mind not standing so close to me, you freak?” (or words to that effect) then suddenly I’ll be the rude one.

The only option I have is to bring an extra towel to the gym and put it on the machine next to me so the freaks will think it’s being reserved and use one of the 7 OTHER ONES instead. I’ll let you know how it works out.