Things My Cats Have Barfed On 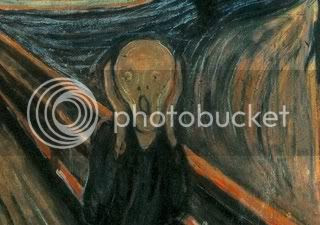 The landing right outside the bedroom door

The railing on the stairs

The roof of the cat box

The inside of a kleenex box (with kleenex)

The inside of the under-the-couch storage box

Creepy Oversized Seafaring Puppets and the Germans Who Love Them 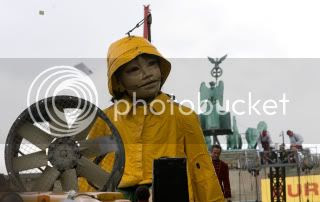 Right now is the 20th anniversary of the tearing down of the Berlin Wall. And they're commemorating that in Berlin. And what better way to commemorate such a landmark event than with two giant puppets parading through the streets of Berlin with a bunch of French performance artists hanging off them? 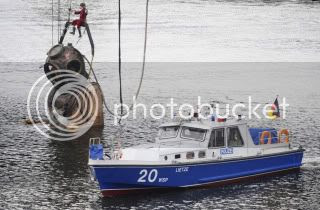 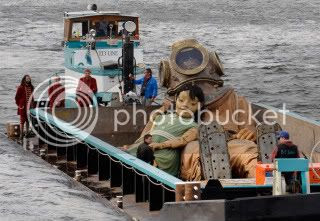 And apparently they've tied the whole presentation together with an equally unrelated story about the two giant puppets. Here's the story:

The Reunion show featured two massive marionettes, the Big Giant, a deep-sea diver, and his niece, the Little Giantess. The storyline of the performance has the two separated by a wall, thrown up by "land and sea monsters". The Big Giant has just returned from a long and difficult - but successful - expedition to destroy the wall, and now the two are walking the streets of Berlin, seeking each other after many years apart."

.......Because I don't know about you, but 20 years ago when they tore down the wall I was thinking, "Thank God that now Deep Sea Divers will be free to walk the streets of Berlin with their nieces again" ............through teary eyes. 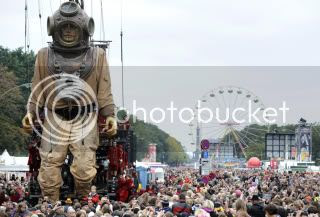 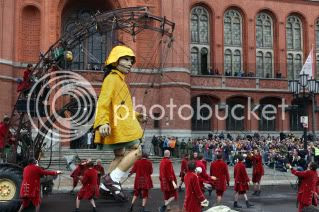 .....It must have been so exciting for the audience in the streets to witness the puppets wandering around missing each other even though they were the only giant wooden figures in a sea of tiny Germans. 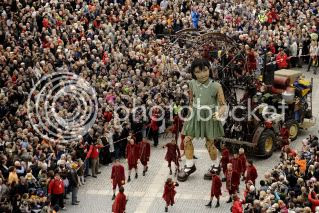 But you'll be glad to know that they finally found each other and later had a slightly inappropriate-looking reunion under the stars with the Deep Sea Diver finally taking his helmet off (after wearing it all day in the streets of Berlin - what is he, a masochist??) and the niece sitting on his gigantic lap. ..........Aaaaaaaaah. 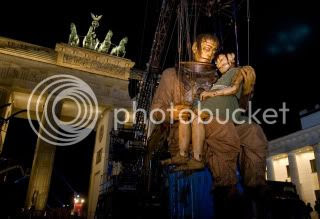